23 Perfect Words For Emotions You Never Realised Anyone Else Felt 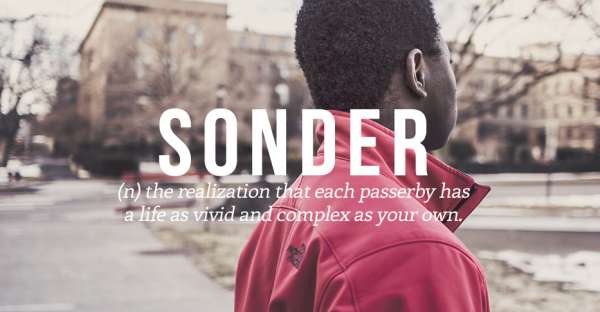 Have you ever felt something, an emotion perhaps, but couldn't put it into words? First, you are not alone. Second, I have found the solution. Here are 23 Perfect Words For Emotions You Never Realised Anyone Else Felt.

The collection, call The Dictionary of Obscure Sorrows, is a compilation of made-up words, written by John Koenig, a graphic designer and editor. His aim is to fill holes in language and to describe emotions we experience but can't describe. There are now dozens of words coined by Koenig since 2009 which seek to define our currently undefined emotions. These words aren't just gibberish, however, and have etymological basis, chosen from various languages and modernised verbiage.

Some of these “new” emotions include:

Sonder (n) the realization that each passerby has a life as vivid and complex as your own (a deep and philosophical kind of wondering or feeling);

Monachopsis (n) the subtle but persistent feeling of being out of place (let's be honest – who hasn't felt this way before?);

Vellichor (n) the strange wistfulness of used bookshops (I particularly like this word. I always have a strange feeling when happening across an old, off-the-beaten-path, used bookstore. Now I know how to describe what I feel.);

Kenopsia (n) the eerie, forlorn atmosphere of a place that's usually bustling with people but is now abandoned and quiet;

Chrysalism (n) the amniotic tranquility of being indoors during a thunderstorm (I wonder if there is a different word to describe that feeling while being in a cabin with a tin roof during a thunder and rain storm? That. I feel that, whatever it is.)

These are just some examples of the 23 perfect words for emotions that John Koenig has coined. His dictionary has actually been applauded by New York Magazine, Washington Post Express and author John Green, to name a few. Check out the rest of John Koenig's original lexicon of emotions we don't have words for on BuzzFeed, at the link below.