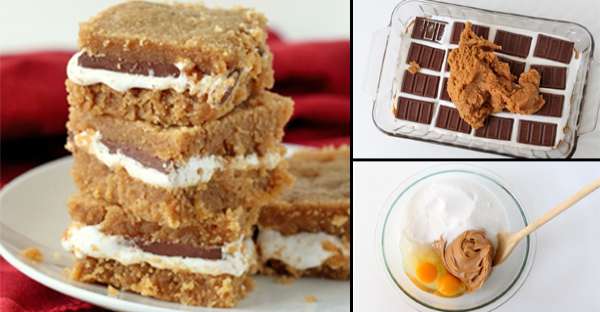 When baking, I tend to choose the easy “no fuss” recipes. Not because I'm lazy, but because my baking skills are lacking (OK, and maybe because I'm a little bit lazy) and, also, I'm impatient. I start fooling around with things like chocolate, marshmallow and peanut butter and I just want to hurry up and eat it already! So these 5 Ingredient Peanut Butter S'mores Bars is the perfect recipe for me (and for anyone else who loves peanut butter and s'mores). Not only does it include many of the sweet things I love, but it's also quick and easy.

Mallory of food blog “Chocolate with Grace” is an accountant by day and an avid food blogger/recipe inventor by night. Once she gets home from her day job, the fun cooking and recipe invention/experimentation begins. Her love for baking started as a little girl; she liked to bake cookies with her mother for her father. Now, her main focus with “Chocolate with Grace” is to share recipes with her friends and family because it helps bring them together no matter how far apart they may be.

The word “s'more” is actually a contraction phrase of “some” and “more”. The first s'mores recipe was published by the Campfire Marshmallows Company in the early 1920's under the name “Graham Cracker Sandwich”, however the text mentions this treat was already popular with Boy Scouts and Girl Scouts and in 1927 the Girl Scouts published Tramping and Trailing with the Girl Scouts and included a recipe for “Some-Mores”. Merriam-Webster, however, was the first to use the word “S'more” in 1974.

Traditional s'mores consist of roasted marshmallow and melted chocolate sandwiched between graham crackers. For a neat twist, in her recipe Mallory has substituted the crackers for blondies (but not your traditional kind requiring flour). Blondies resemble traditional chocolate brownies but usually substitute vanilla for cocoa and also contain brown sugar. Mallory's blondies, however, call for peanut butter. To mix the blondies, all you need are three ingredients. There is no special mixing procedure required and no real rules to follow. It's simple. Very simple. Just like s'mores.

Speaking of simple, you don't even need to melt your own marshmallows for this recipe as Mallory's peanut butter s'mores bars recipe calls for marshmallow creme, which is a sweet, spreadable marshmallow-like confection predating even the s'more. Its first mention was in Fannie Farmer's Boston School Cook Book, printed in 1896, however it wasn't until the beginning of the 20th century that door-to-door salesman Archibald Query invented Solo Marshmallow Creme, and then sold the recipe for a measly $500. In 1917 marshmallow creme hit the shelves.

The only other ingredient you need is the chocolate. (While the recipe only calls for 4 regular sized milk chocolate bars, I'd suggest you purchase 5 so you can eat chocolate while you're baking and still have enough left for the goods!)

Learn MORE / Get RECIPE at Chocolate with Grace