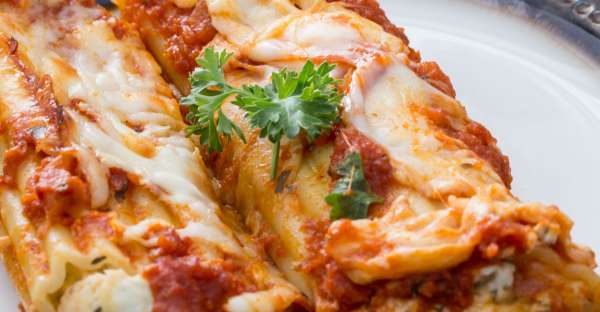 This creamy Chicken and Cheese Manicotti is a delicious meal any day of the week. With creamy herbed ricotta and shredded chicken stuffed manicotti topped with Parmigiano-Reggiano marinara sauce, mozzarella cheese, and fresh herbs this is an easy dinner ideas the whole family will love. You can add some zucchini or yellow squash to the filling if you'd like. Shredded carrots also work, it's a great recipe for hiding some vegetables inside for a little extra added nutrition. If you are trying to save some time you can use a premade marinara recipe, otherwise you can make a homemade marinara sauce of your own. This manicotti recipe is extra creamy with ricotta, cottage cheese, and mozzarella. The filling in this manicotti recipe has ricotta cheese, chicken, and cottage cheese, along with some spices to make it extra good. Then the filling ingredients are pulsed in the food processor, so they get well incorporated, which also makes them easier to pipe into the manicotti noodles. This manicotti recipe can be garnished with a bit of parsley on top for some color. You'll need an 11-inch by 7-inc glass baking dish to bake this yummy recipe idea.

Cottage cheese is just one of the ingredients you will use in this chicken and cheese manicotti. Cottage cheese dates all the way back to 1831 and is thought to have originated because the simple cheese recipe was usually made in cottages from leftover milk after making butter. The curds and whey from the nursery rhyme Little Miss Muffet is another dish made from the curds with whey. Cottage cheese can be used in a variety of different ways from adding it to manicotti, lasagna, eating it by itself with fruit and sugar, or salt and pepper. You can also eat cottage cheese with some fruit puree, on toast, with tomatoes, with granola, and more. Cottage cheese can also be used as a chip dip, or as a replacement for mayonnaise in tuna or chicken salad, in salads, or as an ingredient in recipes like jello salad and other dessert recipes.

Pasta recipe ideas have a long history. You will find mention of lagana in the first-century writing of Horace, where there was mention of fine sheets of fried dough, which were an everyday food item. There is also writing about lagana in the second century where sheets of dough were made from wheat flour and the juice of crushed lettuce. The dough was then flavored with spices and later deep-fried in oil. Then in an early fifth-century cookbook lagana was mentioned again as a recipe made out of layers of dough with meat stuffing, which sounds like a present day lasagna recipe. Fast forward to present day and pasta recipe such as lasagna are more popular than ever. Just like this manicotti recipes the ingredients in lasagna recipes can vary from meat versions to meat versions and recipes that use a variety of vegetables. One common theme when it comes to cooking pasta recipes is the addition of some sauce whether it be a pesto sauce, a tomato sauce, or a cream sauce. The addition of cheese in pasta recipes is also common and the perfect combination with any shape of pasta. Thank you to Rachael at the "Eazy Peazy Mealz" for sharing this easy dinner ideas for chicken and cheese manicotti. This is just one of the easy dinner ideas you will find on the site. Other recipes you will find include appetizer, main dish, dessert recipes, snack ideas, crock pot, drinks, breakfast ideas, soup and salad recipes, cake baking ideas, and more. *