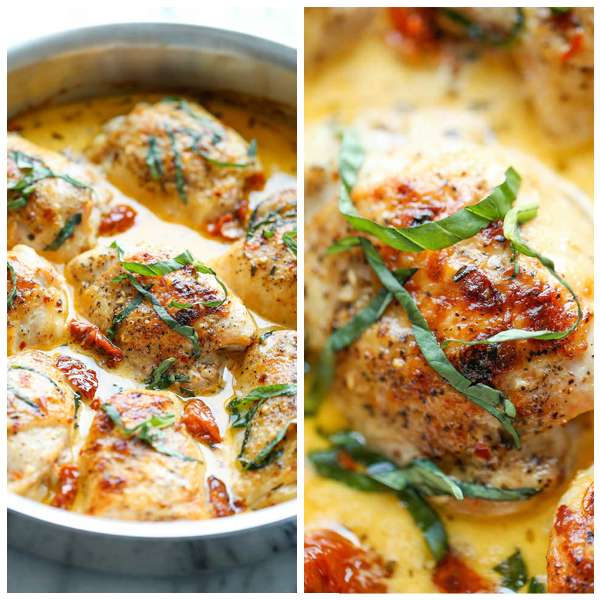 At this time of year, people are thinking a lot about making and eating turkey, but if all of that turkey talk is turning you off, then you will be delighted to try out this awesome Chicken with Sun-Dried Tomato Cream Sauce. Once fall hits, we do like to think about all of the good foods we will be eating at the holidays like Thanksgiving and Christmas. But sometimes all of that turkey can just be too much... Sometimes all you want is just some chicken and something other than squash or some sweet potatoes. As much as we look forward to these things, they can get old pretty fast.

Good thing there are other things you can eat, as the author over at Damn Delicious writes, she just needed a break from all of the turkey, brussels sprout, stuffing and mashed potatoes. So this is Chungah's Thanksgiving meal escape! This meal is so versatile, and could be made at any time of year, for the ultimate chicken dish. It could be great with vegetables and roasted potatoes, or it would be awesome over pasta even. This is a very jazzed up chicken dish, and nothing like you might normally make. With all of that amazing sauce, with all of the great spices and herbs over the nice juicy chicken. Sun dried tomatoes just add such a richness to everything that they are put into. They are wonderfully good for us too, which is an added bonus. They still have all of the nutrients and benefits of raw tomatoes too! But, when they are sun dried, they get an added layer of flavour that they don't normally have. They become sweeter, and they have a nice tart flavour too, since the juices caramelize in the heat.

In this case, the recipes uses sun dried tomatoes in oil, which are even richer than the dry ones you can get. The oil takes on the flavour too, so it is really nice to use in salad dressings or as an oil for pastas, so make sure you hang onto it after you are done with the tomatoes! The sauce has these awesome tomatoes in it, with some heavy cream, for that creamy delicious sauce you see. It has a bunch of spices like thyme and basil and oregano. There is even some parmesan cheese in it. Talk about flavour! This would be a super savoury and rich dish, exploding with flavour in every bite!

The photos that Chungah takes are drool worthy, and will have you wanting to make this amazing dish as soon as you can! Chungah, is the owner and curator of the Damn Delicious food blog. She originally created this blog back in 2011 as a way to share her favourite recipes and recipes she had adapted to her own tastes. But it quickly became a way for her to connect with other foodies from all over the world and try so many different recipes! She has never had any formal training, but she practices her art often and has learned so much just form that experience alone!