Coleman Mine the Best Place to Find Quartz Cluster 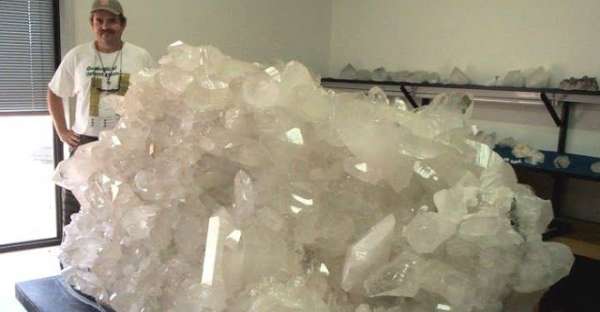 If you love crystals, maybe you'd like to go mining for them. Finding crystal mines can be a daunting venture at first if you're not accustomed to it. Thanks to the internet, there are countless websites and people that will share crystal mine locations with us so we can mine some amazing crystals too. Geology, a website dedicated to all things rocks and minerals shares that the best crystal mine is the East Coleman Mine also known as the Ron Coleman Mine or Old Coleman Mine is located in Jessieville, Garland County, in Arkansas. This has always been the most productive quartz mine in Arkansas and has been producing quartz crystals since 1943. If you can believe it, this mine produces approximately 60,000 pounds of quartz crystals in one month. That would be what's considered a "good month", but even half of that amount would be incredible. You can even go out and mine your own crystals there too which is a very fun activity.

Right at the Coleman Mine, there is the huge mine, plus a gift shop selling beautiful quartz crystals and other minerals. They also have an RV resort and a large digging area for people to mine out of. Here, you could mine for your own quartz crystals and then pay for the ones that you want to take home. They usually charge by the ounce. Some of the quartz the professionals have found at this mine is incredible. One of the pieces is the worlds largest quartz crystal of its quality ever found and most of them are two to three or four times as large as a human.

Access to the crystal mine is located on a road that is alongside Colemans Rock Shop. You drive 2 miles west of Highway 7 and then turn right on Crystal Ridge Road. You then drive to the top of the hill on all paved roads. There is an office and the rock shop at the top of the hill where you pay your dig fee. The Latitude & Longitude of the site is (WGS84): 34° 39' 42'' North, 93° 6' 10'' West if you want to look up the coordinates yourself on a map or GPS. So if you love crystals of all kinds, this would be an excellent trip to take and a really exciting activity to do.

The areas where you're most likely to find crystals are going to be around fault lines. You can search an area where there is evidence of fault lines for ribbons of white quartz. Quartz can also be found around granite and gold deposits. Also, around hot springs or mineral springs are a great area to find crystals or where volcanic action has been seen. Crystals are formed by a process called crystallization where atoms and substances are in a state of chaos and then slowly reach a state of stillness. Crystals don't draw energy from within, but they are formed from a vapour, a melt or a solution. It's also interesting that there is no limit to the size of a crystal, as long as it's left to grow and has enough material supply, it will continue growing. That's why crystals are able to reach such huge sizes like the ones you see here. To buy a crystal of this size would cost thousands of dollars. But you can buy your own smaller crystals that you can place around your home to enhance the beauty and energy of your space. Quartz crystal is especially great for purifying the energy in your home and for bringing clarity to your mind and heart.***