He Flattens Sandwich Bread – Jaws Will Drop When You See What He Makes! 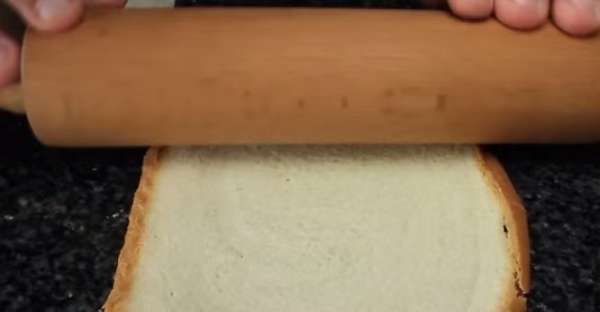 If you are a lover of a sweet breakfast like pancakes or french toast, you will love this simple and amazingly tasty breakfast recipe! Check out this guy's awesome video where He Flattens Sandwich Bread – Jaws Will Drop When You See What He Makes! You might even be able to surprise a few people when you make them these for breakfast one morning. When they see what you do with the bread, and then what it actually eventually turns out to be! I wouldn't have guessed what they would be without watching the video first, but it is such a great idea to make a quick and effortless breakfast that the whole family will love! Not to mention delicious!

First he takes the strawberries, cuts them up and then he cuts all of the crusts off of the bread to make the flat pastry for the roll up. Then after he meticulously rolls them up, he fries them, and they just look so perfect. They have all of the nice ingredients inside, including the cream cheese, which would make these breakfast roll ups even more delicious! Like a cheese cake roll up! Top with some powdered sugar and some more strawberries, maybe some more whipped cream and syrup or honey, and you are good to go! Even kids would love to help out making these and could eventually make them on their own too even! You could even make these with different insides, like chocolate, chocolate and peanut butter, cream cheese and cherry, apple with cinnamon, and so much more! I have actually made an apple pie version of this recipe. Except, you just put apple pie filling in the roll up, you could put the cream cheese if you wanted, I suppose. Then, I rolled them up and rolled them in melted butter and then rolled them in a mixture of cinnamon and sugar. Then fried them in the fry pan... wow... they turned out just like little mini apple pies! They were seriously awesome! The only thing that would have made them any better than they already were, is a scoop of vanilla ice-cream or some whipped cream. YUM! So I really bet that these ones would be seriously amazing too!

French toast is a favourite for people who love sweet breakfast foods, and it's a great way to have some eggs in there too. French toast actually goes way back into the 4th or 5th century, from a Latin cook book called the Apicius. It was usually a way for people to use older or stale bread so it wouldn't go to waste. The recipe has made it's way around the world now, and there are even different variations. Like one in Hong Kong, where they deep fry a stack of bread made of slices of bread and serve it with butter and syrup or honey, sometimes with fruit in the centre. Which doesn't sound too far off from this creation we have here. Head over to 'Crouton Crackerjacks' by following the link in the section below for more!