Is that a sphinx sitting on Mars' surface? 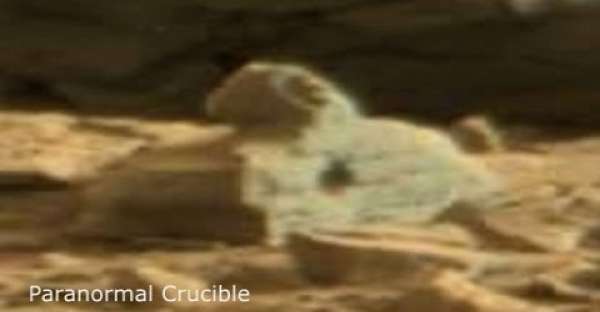 There are some pretty strange articles and photos that turn up on the internet - as we all know. And this article with the title "Is that a sphinx sitting on Mar's surface?" is no exception. A lot of the articles that come up with controversial topics and photos are just there as publicity stunts that aim to drive traffic to a site. With the capabilities of digital images and manipulation it's difficult at times to separate what is real from what is fake. It's so easy for someone to go into photoshop and to create just about anything on a photo. It's not like the old days where a photo was a photo, and although you could have little specs of dust and things that could skew the image in that way, it was still impossible to fully recreate a fictitious setting without some really intensive efforts, props, and equipment.

It's almost as though now people are more skeptical than ever, and with good reason of course. It's hard to believe what we see on the internet, but it doesn't make it any less interesting. People will still click to see or read the article, and to check it out for themselves to see what all the hype is about. That's the case with this article too. So is that a sphinx sitting on Mars' surface? Or here's a better question, is there any way of really know whether that's a sphinx sitting on Mars' surface and to make sure it's not just some geek bored at home manipulating another photo?

This photo is just one of the many lately that have been turning up on the internet showing familiar objects to us inhabitants of Earth found on the face of Mars. Things like thigh bones, guns, and a statue of a human. The argument is whether or not these are actual artifacts and proof of alien inhabitants or whether it's just our human minds trying to find familiar shapes out of otherwise random patterns. Whatever the case, checkout the article for yourself and come to your own conclusion to the question - is that a sphinx sitting on Mars' surface?