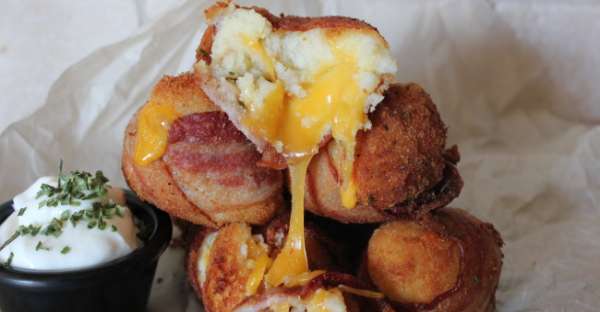 Mashed potato recipes are popular all over the world. They can be served with other dishes as a delicious side dish recipe. They can also be used as an ingredient for dishes like shepherd's and cottage pie, pierogi recipe, colcannon, dumpling recipes, potato croquettes, and gnocchi. How do you make the perfect mashed potatoes? It depends on the type of potatoes you use, along with the addition of milk, butter and salt. You will also need a good potato masher. You might even add some other herbs and spices for the perfect mashed potato recipe.

The ingredients you will need for this mashed potato bacon bombs recipe include chilled mashed potatoes, bacon, egg, dry bread crumbs, cheddar cheese cut into one inch chunks, and salt and pepper. You will also need some skewers or toothpicks, some oil for frying and some sour cream, and toppings for dipping.

To start in a large bowl combine the mashed potatoes, egg, salt and pepper until they are well combined. Then grab a small scoop of the mashed potatoes and gently form it around one of the cheddar chunks. Then put the bread crumbs into a shallow bowl, and roll that the bomb evenly into the bread crumbs. Then fry them in the oil heated to 350 degrees Fahrenheit, until they are a nice golden brown. When done frying let them drain on some paper towels. Serve the mashed potato bombs with some sour cream, and serve them warm. You can also take this potato bombs recipe up a notch and add some chopped Jalapeńos, or green chile to the recipe. You could stuff some seasoned ground beef in, or some stuffed sausage. Just use your imagination, the possibilities are endless!