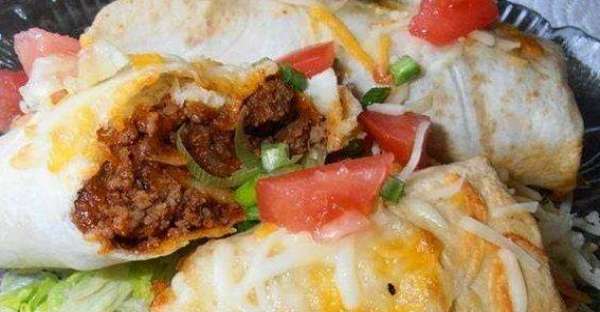 Some food is so awesome in restaurants, that you just have to try and make them yourself at home! Like these Simple Beef Chimichangas! What a great idea to make these simple and hearty chimichangas for dinner or maybe even for lunch. They would be a great addition to any family weekly menu and I just know kids would love them. I remember loving burritos when I was a kid, and I still do... I would even make them myself when I was a kid and make dinner for my family all by myself when I got to a certain age. I still have burritos as a favourite meal, and have recently just stared to like chimichangas. I had never heard of them until a few years ago, and then when I tried one, wow! I thought it was so awesome! They are very popular in the United States, but not really in Mexico, or Canada. They are known to be more of a Tex Mex food than an authentic Mexican food. You can even buy them in some grocery stores now. But making them from scratch at home is always so much better!

These chimichangas would be just as easy to make as burritos, because they really are just burritos, only they are either deep fried or baked, like in this recipe here. There is still an ingoing debate about where chimichangas were first invented and by whom. One is that they were invented in 1922 in Tucson, Arizona, by Monica Flin, who when working at her restaurant, El Charro, accidentally dropped a burrito into a deep fryer and then when it came out all crispy, and she tried it, she was so impressed with how great it tasted, so they started serving them. Or another thought is that they were invented some years later in 1946. Woody Johnson claims to have invented them in his restaurant, when he was experimenting by putting a few burritos in his deep fryer. Who ever made them or invented them, they are awesome! And they make for a great dinner or lunch meal. The dish has slowly started to expand out to the other states from Arizona. Either way, they are super delicious!

In this particular recipe, they are just baked, and topped with cheese and then baked again, which would make them even more delicious! Cheese can always bring a recipe up a notch making it even better than before. These would be awesome for making a bunch of and then freezing to use in the future for a weeknight dinner or lunch. They would be good for kids to bring to school and microwave for lunch even. This is a great recipe blog that you should totally check out, they have tons of great lunch, breakfast, dinner, dessert and appetizer recipes that would be so nice to try out. Make sure you bookmark this page or even pin it to a Pintrest board, so that you can refer back to it whenever you want to. Head over to 'My Fridge Food' by following the link in the section below for more!

Learn MORE / Get RECIPE at My Fridge Food