The Best Tasting Cream Cheese Enchiladas I Have Ever Had 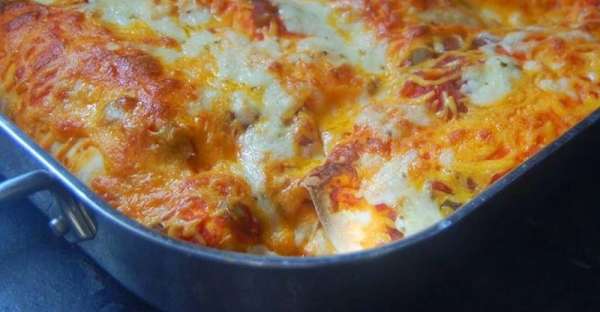 The widely know Mexican dish enchilada recipe just got a makeover with this new recipe we found. Ladies and Gents, say hello to this The Best Tasting Cream Cheese Enchiladas I Have Ever Had recipe that will make you fall in love with cream cheese all over again. We found this gem from a blog called Cassie Craves. The blog owner is a wife and a mother from the Midwest. She is passionate when it comes to cooking and baking. It's amazing how she has learned all the recipes she's been posting on her site simply by watching the Food Network.

Allow us to give you a little bit of trivia about enchiladas, so you'd more appreciate the uniqueness of this recipe that was recreated from it. Basically, an enchilada is a dish that has a lot of chili pepper sauce going on and its tortilla is often filled with meat, beans, seafood and a combination of any of them. You can pretty much customize its fillings; just don't remove the chili pepper sauce because it serves as its signature ingredient.

This recipe will rekindle your love for spicy Mexican food recipes, just in case you fell out of it. You're probably curious on how it would taste now that some cream cheese is involved. But note that its involvement in this enchilada is not just a little. It is the star ingredient! If you're watching your diet, we could suggest that you find a low-fat cream cheese as an alternative. In case you didn't know, cream cheese is actually considered healthy if you're trying to lose weight. It is way better than other cheese products because this does not contain any trans fat that would harm your body. But if you want to just be extra sure that you won't gain weight, just go for the low-fat one.

Some of the ingredients you will need for this dinner recipe include some softened cream cheese, sour cream, prepared salsa (unless you want to make your own homemade version), shredded cheddar cheese, and some shredded pepper jack cheese. You will also need some shredded chicken, some frozen thawed corn kernels, chili powder, cumin and some salt and pepper.

Preheat the oven to 325 degrees Fahrenheit, and in a medium bowl you can cream together the softened cream cheese and sour cream. Then stir in some salsa, and some of the shredded cheese. In another bowl mix together the chicken, corn, chili powder, cumin salt and pepper. Then add the chicken mixture into the cheese mixture and stir the ingredients until they are combined. Then spread some of the salsa into the bottom of a baking pan, and place some of the filling onto a tortilla, then roll up the tortilla and place into a baking dish with the seam down. Repeat this process for the rest of the tortillas. Then pour the rest of the salsa overtop the enchiladas, and spread to coat all the enchiladas in the baking dish, and sprinkle with the rest of the shredded cheese. Put the baking dish into the preheated oven, and bake for approximately 20 to 25 minutes, or until the recipe is hot and bubbly. When ready to serve sprinkle the recipe with the rest of the scallions and serve while still warm.

This site is a way for blogger to cook, which she believes to be a form of therapy, a way to reflect on past memories and to make new ones. She enjoys cooking quick and easy recipes, that are also balanced meal recipes that her whole family can enjoy. If you have any questions regarding the recipes on her site, feel free to email her and she will help out the best she can. On the site you will find everything from weekly meal planning, dessert recipes and dinner recipes.