When the Children Crashed Dad's BBC Interview: The Family Speaks 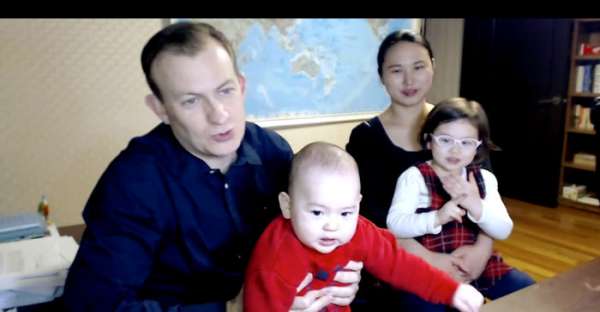 In the world of viral videos, this one might be the funniest. During a live television interview Robert E. Kelly, the so-called BBC dad had his young children wander hilariously into the room while he was doing a live Skype interview on South Korean politics. The father of two recently met with reporters along with his family to discuss their newfound fame and the very public family blooper that has made them a viral internet sensation. Dr. Kelly, a professor of political science, thought he would never be invited on television again. He and his wife, Kim Jeong-ah, thought the interview was a disaster after his four-year-old daughter, Marion marched into the room, followed by his 8-month-old son, James. After the kids had stormed into the room, his wife burst into the room and quickly got the children out. If you haven't seen the viral video already, you will want to take a look.

Dr. Kelly said that his real life punched through the fake cover that he had created on television. Which is something that a lot of parents can certainly relate to. This is the kind of thing a lot of working parents can relate to. And after some backlash against the viral video he had to make clear that he wasn't manhandling his daughter when he was pushing her away during the interview. He has said that he was simply trying to slide her behind the chair so that she could be closer to her toys and books in the room, and was hoping to distract her. Some people who have viewed the viral video wondered if the lady in the video was the family nanny.

Dr. Kelly, who is originally from the United States, met his future wife, a yoga teacher in 2008, at a shopping mall in Seoul shortly after he moved to South Korea. He and his wife rarely talk about race, but the couple does wonder whether their mixed-race children will face prejudice growing up in Asia. So far they haven't gotten any flak, and says his daughter who is bilingual, is doing well in a Korean kindergarten. The couple sometimes wonders whether their children will get bullied. Dr. Kelly has been a contributing guest on the BBC for several years, and regularly discusses the tumultuous politics of the Korean Peninsula from the now-famous room in his house. His internet fame comes at a time when he has been high in demand with the recent deluge of news about the two Koreas, including the removal of Park Geun-Hye as South Korea's president and North Korea's missile testing. Dr. Kelly has expressed some concern about all the attention his family has been receiving and says they have been buried in phone calls. He has however denied any intention of cashing in on their newfound fame and says it would be unseemly to monetize something that involves his children. And contrary to internet speculation, Dr. Kelly said that he and his wife did not fight after the interview ended. And he also shot down a widely circulated theory for why he had not gotten up from his chair. And in response to the theory Dr. Kelly says that he was in fact wearing pants. With all the bad news that we seem to be faced with daily this is story is sure to make you smile.

This is just one of the stories you will find on the NY Times site. Other topics of interest on the site include the world, U.S., business, celebrity news online, tech, health, sports, news about famous people, art, food and so much more. **