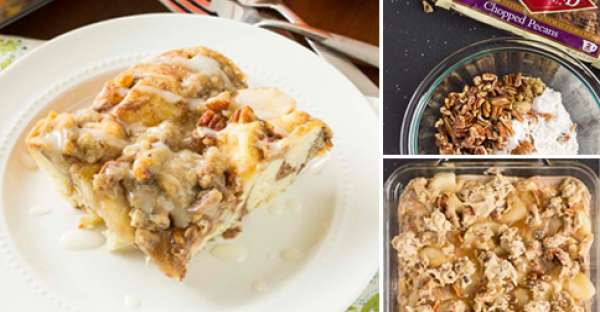 Autumn is the most beautiful of seasons. Beautiful red, orange and gold leaves. Pumpkins galore and the harvest time of apples. Really, what is more autumnal that apples? So, with autumn just around the corner, I thought to myself 'what a great time to try out a new apple recipe'. I went looking far and wide and finally came across food blog “Deliciously Sprinkled”, which just happened to have an amazing recipe for Apple Streusel French Toast Bake that is a must-try for lovers of all things apple-y and delicious.

I have to be honest. While I love apples, what really excites me about this dish are the streusel and French toast. In baking and pastry, streusel is a German word meaning “something scattered or sprinkled”; it is simply a crumbly topping of flour, butter and sugar that gets baked on top of treats like muffins, breads and cakes. Modern recipes often call for spices and chopped nuts (this streusel recipe calls for chopped pecans, but you could swap that for another nut, such as walnuts).

French toast is also known as eggy bread or gypsy toast. It is a dish made of bread soaked in beaten eggs and then fried. The earliest known reference to French toast is in a collection of Latin recipes dating to the 4th or 5th century (although the recipe mentions soaking milk, nothing about eggs, and gives it no special name, just aliter dulcia “another sweet dish”). The dish was also widely known in medieval Europe and was often served with game birds and meats. But, if the French didn't create French toast, why is it called “French toast”? According to legend, Joseph French from Albany, New York, 'created' the dish in 1724 and advertised it as “French Toast” (he meant to call it French's Toast, apparently). Whether true or not, pain perdu (French slang for “lost bread”) is delicious alone or combined with other ingredients and recipes.

Deliciously Sprinkled list a few “baking tips” before getting started. French toast has actually been substituted for Pillsbury cinnamon rolls. The apple pie filling is actually prepared apple pie filling, but could (and in my opinion should) be substituted for real apples. Finally, cream cheese icing is an amazing drizzle to complete this dish, especially when paired with the cinnamon bun base.

With the various prepared food items, this dish is quite quick and simple to make. There are really only two main steps: making the streusel and making the “French toast” creation for underneath the streusel. Much of the guess-work has been removed and many of the ingredients are ones many of us would typically already find in our pantries on a rainy autumn day. And, for an extra-special treat, try serving with a little French Vanilla ice cream as a snack or as a dessert. The hot, gooey apples (or apple pie filling) combined with the rich taste of cinnamon and vanilla ice cream can't be beat for flavor and deliciousness. A comfort food recipe for sure!