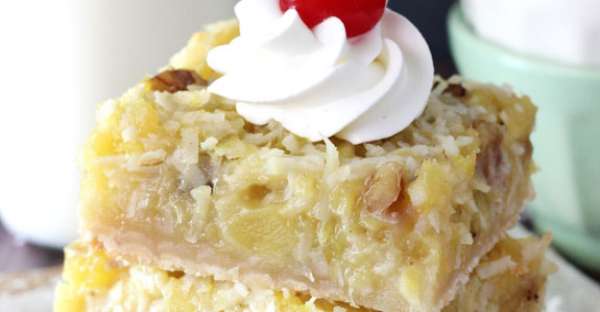 This mouth-watering Pineapple Coconut Bar is going to top your list! This fruity recipe is ultimately delectable! Well, The star of this recipe? Ladies and gentlemen, please give Pineapples your standing ovation. Whoo! If you are looking for something new for dessert, why not try this recipe? “Oh yes! Why not?” You're right! Now let's “Prepare the baking tools! We're going to be Pineapple Coconut Bars-wasted later!” Oh, alright. Contain yourself, buddy! Do not worry. We're going to explore the recipe later. For now, why don't we have a little chitchat with Pineapples first? Well, since everyone loves this fruit, I think it would be great if we know something about it, right? “Yes, that's true!” Great! Anyway, let's begin.

Pineapple is a large fleshy edible fruit with a terminal tuft of stiff leaves and is widely cultivated in the tropical countries. Pineapples are indigenous to South America. It originates from southern Brazil and Paraguay. The natives of Brazil and Paraguay are the ones who spread pineapples all throughout South America, the Caribbean, Central America, and Mexico. In 1493, Christopher Columbus encountered pineapples, and he calls it 'pińa de Indes' that means 'pine of the Indians'. Columbus brings it back with him to Europe, therefore, making pineapple the first Bromeliad to leave the New World. The Spanish people then introduced the fruit to Hawaii and the Philippines. And did you know that in the Philippines, pineapple leaves are used in making the famous Barong Tagalog and Baro't Saya? For those who don't know, Barong Tagalog and Baro't Saya are the formal dresses in the Philippines. Anyway, the pineapple leaves' fibers are used as the material for the making of these dresses.

Now is the time for pineapples' health benefits. Pineapples contain Vitamin C, which boosts the immune system. Vitamin C is a good fighter against infections. According to Linus Pauling Institute at Oregon State University, as cited by Jessie Szalay, pineapples are also an antioxidant and can help fight against cell damage. Pineapples have manganese that is essential for bone strength. It can help prevent osteoporosis in post-menopausal women. Pineapples as anti-inflammatory? Absolutely! Pineapples contain bromelain. “Due to a complex mixture of substances that can be extracted from the core of the pineapple, well known as bromelain, pineapples can help reduce severe inflammation ... and can reduce tumor growth,” says San Diego-based nutritionist Laura Flores, as quoted by Jessie Szalay.

So guys, what do you say? Shall we start the baking now? “Yes! I'm excited!” Okay! Now it is time for you to enjoy! The link to the recipe is found on the "Life, Love and Sugar" website below.

Learn MORE / Get RECIPE at Life, Love And Sugar