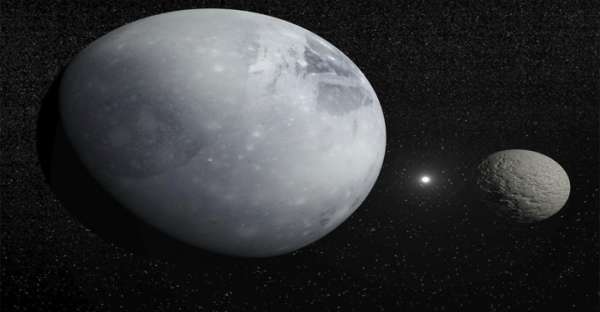 We've all seen the amazing images of Pluto the New Horizons space probe has been sending back to NASA here on Earth. After countless years of speculation on what, exactly, the most distant planet from the sun looks like, we now know – in vivid detail! This has to be one of the most exciting space explorations since we landed on the moon, and because of these highly-defined images, English physicist Brian Cox has recently said Pluto could actually harbour alien life.

How can this be? Well, the New Horizons' images of Pluto are showing a number of glaciers on the dwarf planet's surface. Quite often, the presence of glaciers implies a possibility of underground water – perhaps even an ocean! And if that underground ocean is warm enough, it could also provide the essential chemistry for organic life – the “primordial soup”, so to speak, that is said to have spawned life here on our planet as well.

Please note that Brian Cox has also stated that humans could well be the only complex life forms in the Milky Way Galaxy. However, he has recently told 'The Times': "The New Horizons probe showed you that there may well be a subsurface ocean on Pluto, which means - if our understanding of life on Earth is even slightly correct - that you could have living things there." By 'living things', Cox means simple-celled organisms, not anything quite as complicated as human beings, but we have to admit: new information like this sure does spark the imagination! Launched by NASA in 2006, the New Horizons spacecraft began flying through Pluto's system on July 14th, 2015, sending exciting data and photos back to Earth. Not only did we get our first glimpse of the most mysterious planet in our solar system, we also got to view its several moons: Charon, Styx, Hydra, Nix, and Kerberos.

To get there, the space probe had to travel almost 3 billion miles over the space of nine years while we all waited, with baited breath, to see Pluto for the first time. When New Horizons was first launched, Pluto was thought only to have three moons, but much was revealed as the space probe drew closer to its destination. First, Pluto was demoted from a full-scale planet to a “dwarf planet” due to its tiny size in comparison to the 8 other planets revolving the sun. (It was recently reinstated as a full-on planet, however). In addition, two more moons were discovered, bringing Pluto's moon count up to five.As it approached Pluto, New Horizons flew past Jupiter in 2007, and sent back several magnificent digital images of the largest planet in our Solar System as well.

Now that it has passed Pluto, the space probe will continue onward and outward to the Kuiper belt and will continue to transmit never-seen-before images of our brilliant universe. In the meantime, more images of Pluto are arriving at NASA with each passing day. We haven't even scratched the surface of all the information it has captured yet.